Which advantages and disadvantages do open space and closed space offer?

Over the years, there’s been a relentless shift to open-plan offices. But why are open workspaces so attractive? When should you look to keep a space closed? And what do workspace consultants recommend works best?

‘Open plan’ has been part of business vernacular for years. And when properly designed and carefully delivered, an open-plan office layout can have a great effect on work, results and space costs.

Equally, poorly designed open offices can decrease efficiency and employee satisfaction. So, while the cost might be higher, there are times it’s better to create closed office spaces.

A lot depends on the company, its industry, the work they do and the workstyles they have.

Our workspace consultant, an expert in the area, confirms that closed offices aren’t in trend: “One of the reasons we advise clients to build closed office space is to house teams with a sensitive agenda or a type of work that requires more focus. The only other times you generally see them today is in very conservative companies, or perhaps a government organization that’s still set in its ways.”

And when it comes to managers, should all of them have desks out in the open, near their teams?

It depends. On one hand, everyone has easy access to them – you can ask the manager a question in a heartbeat. On the other, the manager is constantly disturbed. When anyone sees them and needs them, the first thing they do is talk to them.

As our workspace consultant continues, “Even though managing is part of their job, they also need their own focus time. If they sit behind a closed door, people think twice about interrupting.” 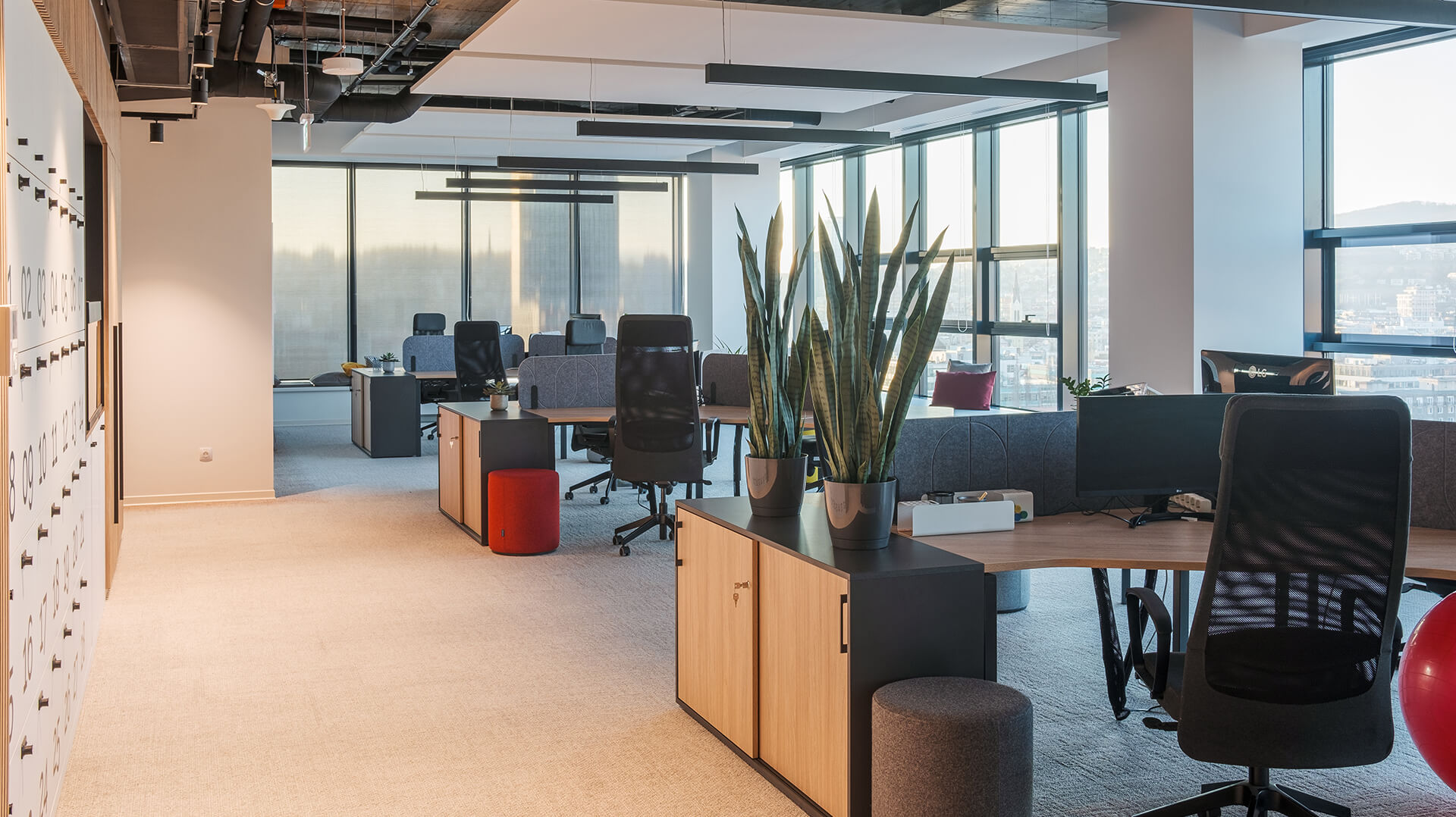 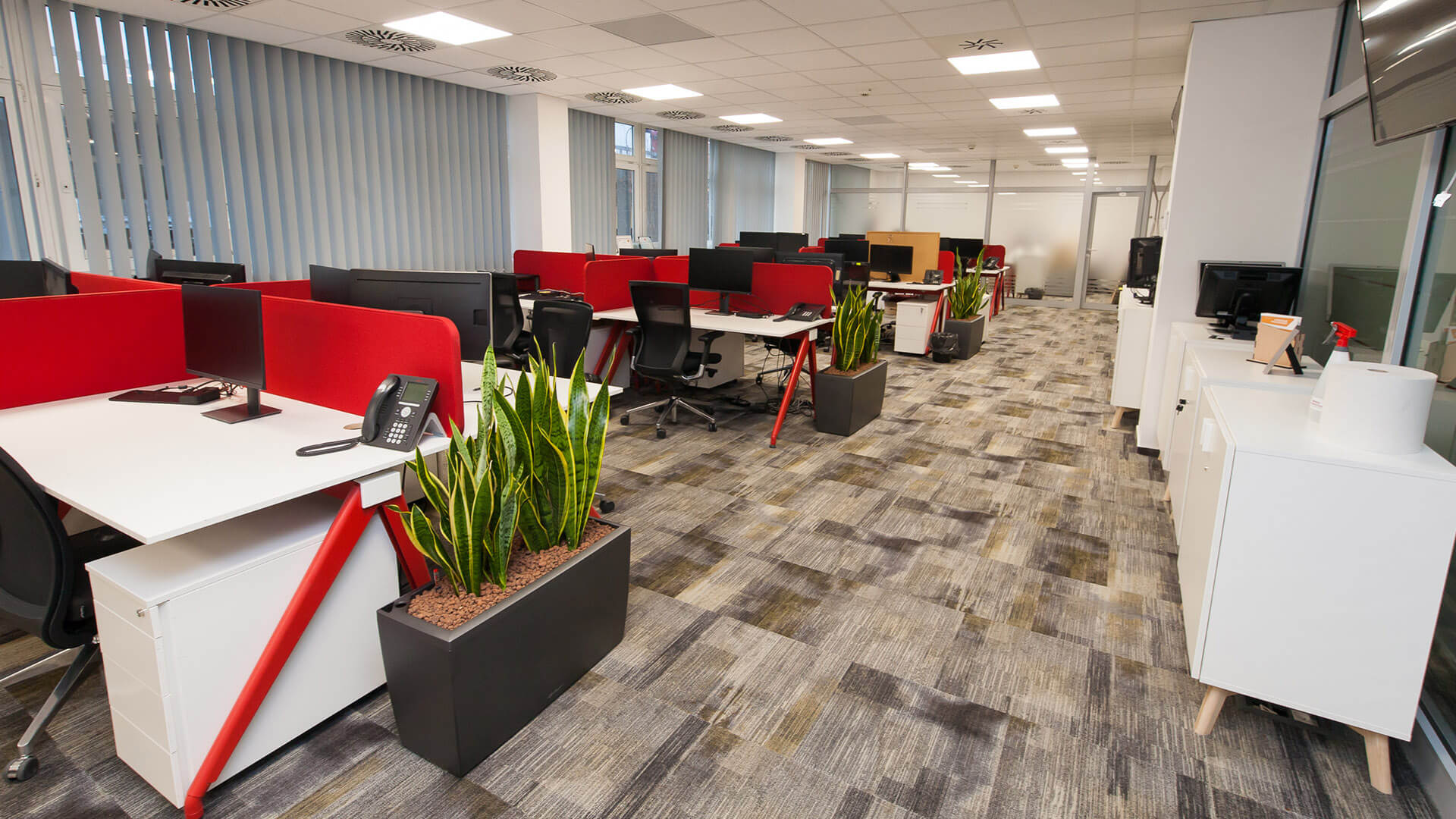 The advantages of open-plan workspaces

It’s a generally accepted fact that it’s easier to be collaborative and share ideas in an open space. So it’s certainly better for some teams that innovate. This is because if people are in separate offices, those sparks of genius might die without ever being realised.

Moreover, if you put teams whose agendas intersect near each other, you’ll have more cross-pollination: an increase in holistic learning and information sharing, as well as faster processes and decision making. In fact, the very nature of teams and their efficiency of problem solving can sometimes be defined by who they sit near.

You don’t have to knock on a door in an open office. You just talk, laugh at jokes told at the next desk and share stories. Simply walking into an open-plan office and seeing people’s faces is a natural icebreaker.

Our workspace consultant concurs: “For me, when I joined a company early in my career, it was difficult to interact with people. Why? Because I was in a closed office with just five people. With the work I do now, I wouldn’t want to work in one again.”

One of the other great things about an open office is might be easier to change teams around organisationally, for specific projects and to tackle certain tasks. All you have to do is move some tables and visual barriers.

If you’re company’s growing at speed, an open space usually gives you the freedom to add extra desks and, again, put people near colleagues that will help them thrive.

The disadvantages of open-plan working

It can be usually more difficult if not impossible for some people to do really deep, focused work in an open-space office. Research shows that it takes up to 25 minutes for your brain to properly engage in a task. A small noise, a temperature change or the physical touch of a colleague can break that concentration.

Also, it’s hard to keep everyone happy. Colleagues want different temperatures or levels of light – both of which impact others’ moods and productivity.

And that’s before we mention the talking. People might be sharing great ideas, but if you want to focus on work – and can’t move to a different room – it can be annoying. Especially if there are no informal rules set on how to behave.

There are lots of other disturbances that can make life hard for employees sitting in an open-space office. First and foremost are corridors – with their endless flow of traffic and noise. This is a reason why, here at HB Reavis, we separate our open spaces from the main corridors with focus and meeting rooms.

Next are social areas like kitchens, dining areas and break-out zones. They’re full of jarring sounds, from plates being taken out of the dishwasher and small talk while a coffee brews, to the opening of sandwich bags to prepare a meal.

If your layout means someone has to sit in or closer to a more public area, think about the working styles of your teams. Try to leave out teams that focus majority of the time, and for example consider teams that collaborate a lot or have lots of meetings, so they do not have to sit by their table all the time.

To continue our example, the team that sits next to our kitchen at HB Reavis is often on the phone – so they simply run to the open space to talk without disturbing their colleagues. Conversely, our legal team – who need two screens and lots of focus time – have their own, closed office.

The last disadvantage that we often encounter is that open spaces don’t support all the typical needs of a modern business. You can’t have private meetings, personal calls, individual working, or unobtrusive Zooms. To do these tasks effectively, you need to set office space types aside for focus and meeting rooms and have places tailored for in-person and online collaboration.

The advantages of closed offices

You’re in charge when you have your own office. However your creative process works, whatever helps you brainstorm – the space is yours to transform. It could be a flipchart, sticky notes on the wall or a piece of tech. You can adapt closed office of your team to your needs without any prejudices about your ways of working.

One of the biggest advantages of a closed office is the privacy. Here at HB Reavis, we create closed offices for some departments that use sensitive materials – for example, finance and legal.

Even though only an employee has an access card to get into an office, they’re not only open to employees. If you are working here at HB Reavis, you can sometimes notice contractors, interns, suppliers and clients walking around the office. It’s important they don’t have access to, or accidentally see, classified information.

In a closed office it’s easier to be yourself. If you’re part of a small team, you can create a real identity for your group by modifying it – your way.

“I’ve sat in six different spots during my time at HB Reavis. I liked the closed office the most because we transformed the space.

I had a poster of Whistler’s Mother that was repainted by Mr Bean and printed on flipchart paper and placed in a big old wooden frame. I had a great set of speakers too, so we could listen to music while we worked (with the encouragement of my colleagues). You don’t have that level of freedom in an open-plan office,“ said one of our colleagues.

The disadvantages of closed offices

When you’re isolated in a closed office, you can easily neglect the people outside the door. You might miss a spontaneous lunch or a coffee – and lose out on opportunities to build professional and personal relationships.

What’s more, if you spend most of your worktime in a closed office, you don’t have access to the informal office chat, and you may find that news and key events and information pass you by.

When all’s said and done, one of the biggest factors behind the move away from closed offices is the price per square metre. Sometimes It makes more economic sense to keep the majority of the workforce in open-plan offices – and try to mitigate the disadvantages with features like small focus rooms.

But while the idea of an open space sounds financially enticing – simply putting the same tech, desks, chairs and other equipment in a space – it’s not a universal solution. It can impact both wellbeing and productivity.

Build the office around your people

Ultimately, the decision to go with open, closed or a mix of both depends on who you are and the nature of your business and workstyle of your departments or teams.

Some employees need a space to focus all day. Some collaborate almost 9-5.

Some employees don’t care about temperature and light. Some are extremely sensitive.

The key is finding out what your workforce needs. Our consultants at Origameo are experts at defining what solutions work best for both your business and your people.

As a starting point, we’d recommend our FREE Strategy Creator, which gives you good insight into what your ideal workspace might look like.

Sources & about the authors

Information in this article is based on our  Space & Experience Toolkit. The article was written by Christopher Svitok. 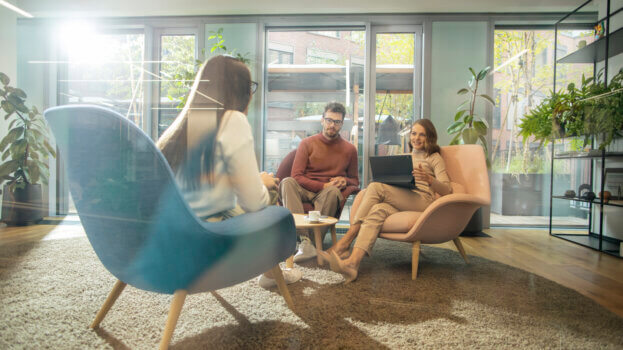 What does Office Fit Out by Origameo look like?
Story 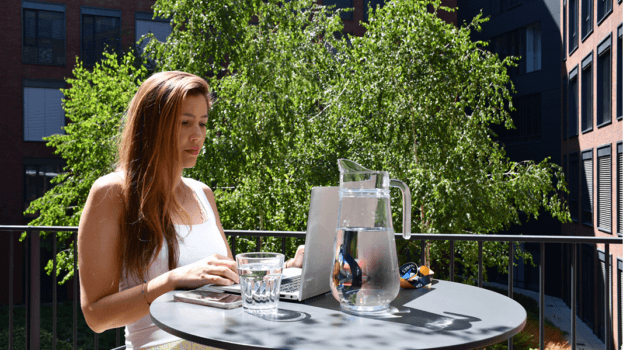 What to do when Summer makes productivity go South
Story 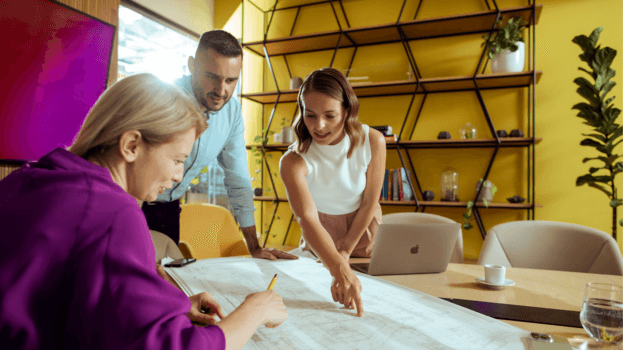 What is Workspace Consultancy?
Get the first insights and calculations with our online tool...
No worries
it won't take you more than 5 mins
it's completely free, no strings attached
the outcome is an easy-to-follow PDF
Let's look into your workplace strategy
Are you thinking about an office redesign or relocation? We feel you. All the floor plan and fit-out issues can be super confusing. Fill in some basic details in our online tool and let us do the initial estimations for you.
Trusted by the strong brands